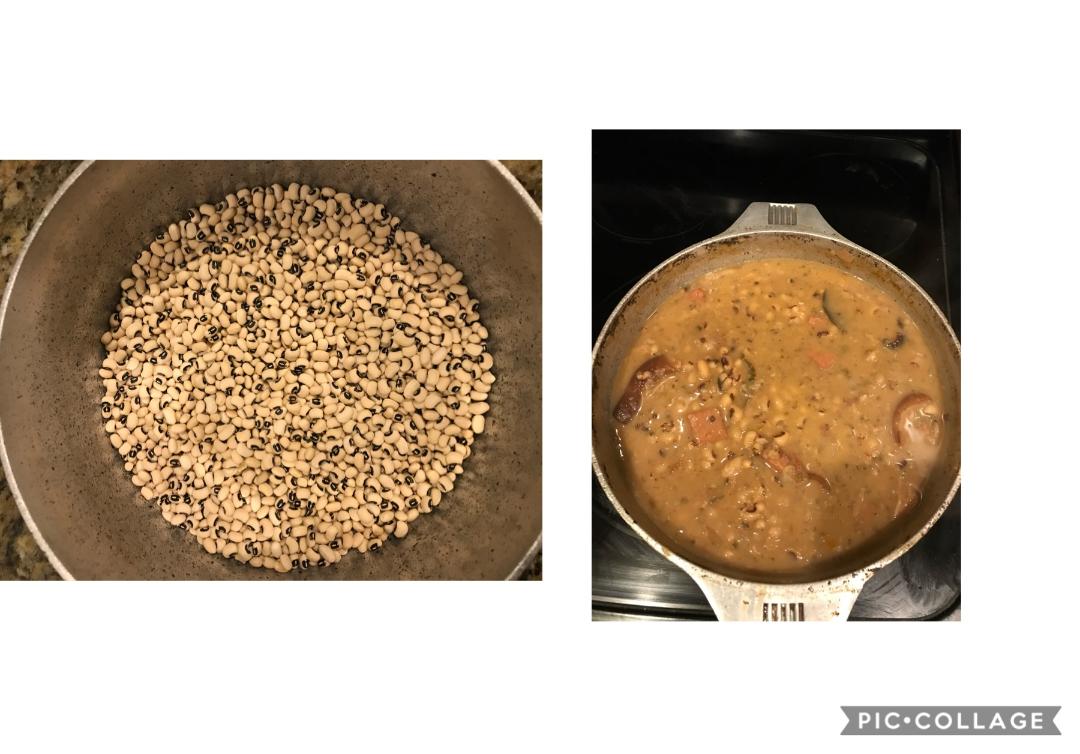 … that black-eyed peas originated in Africa?

It is a tradition of millions of Americans all over the country to cook black-eyed peas and cabbage for New Years. The featured image above shows dry, uncooked black-eyed peas on the left and the cooked peas, a la New Orleans, on the right. This pea is one of the many African-domesticated plants and cultigens that have migrated from Africa to Asia, Europe, and the Americas, usually by means of human transport instead of ocean drift. Indeed, for years it was erroneously assumed that cultivated plants and vegetables common to Africa and Asia, and India especially, before the historical period had been domesticated in Asia. Recently some of these errors have been corrected.

Though many plants have been domesticated all over the African continent, the main center of African plant domestication seems to have occurred in West Africa in an area centered around the bend of the Niger River in the modern country of Mali (a part of ancient Mali and ancient Ghana before that). The Niger River has its source in the Highlands of Guinea from which it flows to the northeast through Mali where it changes directions and begins to flow southeast traversing through the counties of Niger, Nigeria, and Benin where it empties into the Atlantic Ocean. The bend, or the crescent that it forms, is in Mali. The people who live in this area are the well-built, highly regarded Mandingo people, who are part of a larger group of people called the Mende who made up most of the captured Amistad Africans from Sierra Leone.

Like several other African domesticated plants which passed from Africa to India, China, and other parts of Asia, plants such as pearl millet, sorghum, Bambara bean, celosia, amarantha (a type of hotherb or green), and lablab (whose pods, seeds, and leaves are used for environmental protection and forage), the black-eyed pea  (called a cow pea), long thought to have originated in Asia because it was found in both places, is now universally acknowledged as of African origin,  probably Central Africa. The Chinese long bean, a special form of the cowpea or black-eyed pea, was long thought to be of Chinese origin but “A surprising thing about this “Oriental” vegetable is that it is not from the East at all. In the beginning—thousands of years ago—it was unknown to any Asian, or for that matter any European or New World inhabitant. But it was well known to Africans. This historical fact is a fairly new realization. A century ago even botanists were fooled into labeling the plant Vigna sinensis (bean of China). (Lost Crops of Africa, Vol. 2, p. 223).

Plant domestication is important because it is associated with the advance of civilization and the formation of dense populations due to the more reliable and abundant food supply made possible by humans deliberately growing and improving wild plants rather than just depending on hunting, fishing, and foraging. During the Middle Ages, Arab and European travelers to Sub-Sahara Africa, especially West Africa, encountered centers of dense populations associated with well managed and well laid out cities. It did not take Europeans long to realize that they had found the labor power they sought for New World development, large numbers of people who were agriculturists for the most part. With willing cooperation from African leaders and rulers, the dense populations were greatly diminished over several centuries.

Like other legumes, the cowpea (black-eyed pea) provides an impressive array of benefits to the human consumer. Its seeds “famously deliver the amino acids needed to grow or repair protein-based tissues such as brain, nerve, and muscle, as well as to construct the enzymes and proteinaceous hormones necessary for normal life functions. As tools for balancing nutrition they can have a powerful overall effect among the impoverished masses. By providing protein (not to mention vitamins, minerals, and energy), they make main foods—notably, the bulky staples, such as rice, maize, cassava—work better in the body. In this sense, they help increase the bioavailability of other nutrients. Grain legumes, in other words, act like nutritional cogwheels, making everything else go round and round in proper order.” (Lost Crops of Africa, Vol. II). Since it thrives in many types of soil, the cowpea is the most widely planted native legume in Sub-Sahara Africa. The fact that grain legumes such as red beans and black-eyed peas make staples such as rice work better in the body may be the reason why people in the New Orleans area, and the Gulf South generally, always eat rice with their beans, an alien practice to me since I hail from the northern Mississippi Delta where beans are eaten with corn bread only.

I will be posting more about ancient African plant domestication in future posts. Some of you will be surprised to hear about some other common food plants that were first cultivated in Sub-Sahara Africa. Though the internet is replete with information on this important topic, I found Murdock’s Africa: Its peoples and its culture and the NRC’s Lost crops of Africa, Vols. I, II, and III to be must reading for one interested in this topic.