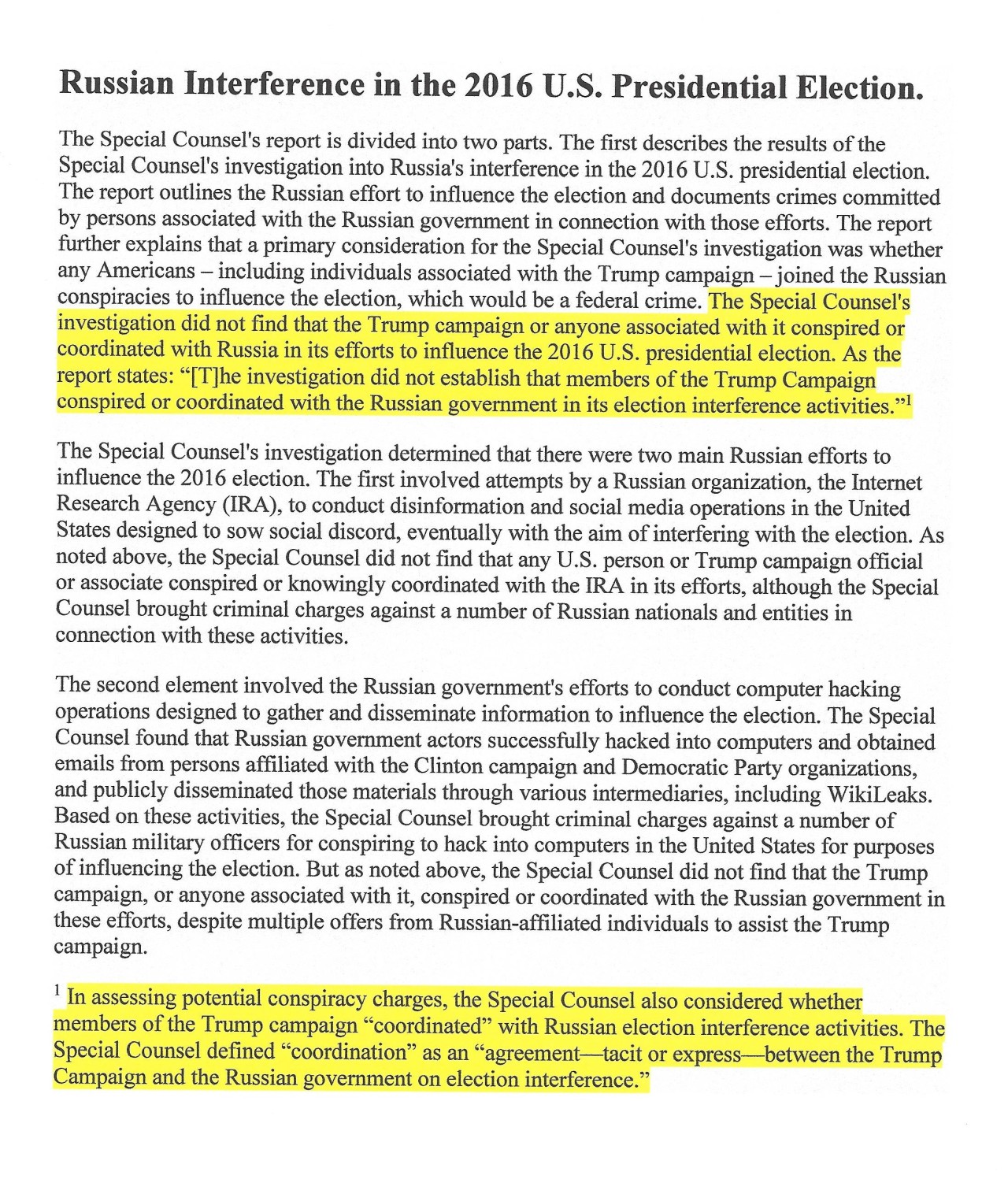 … that the continual attempt to connect Trump with Russia is ludicrous?

The continual attempt to link President Trump to Russia is a laughable absurdity. In spite of the fact that the Mueller Report definitively declared that there was no evidence of a conspiracy (read the page from the summary of the Special Counsel Report shown as Featured Image above and a few pages from the full redacted report issued by Mueller under References below; pertinent passages are highlighted in yellow) between Trump or the Trump Campaign and Russia to influence the outcome of the 2016 election, some highly placed individuals are still asserting or implying that Trump colluded with the Russians or was elected because of Russian interference on behalf of Trump; Mueller investigated whether there was a conspiracy rather than collusion because collusion is not a crime, according to Mueller. In recent testimony before Congress, former FBI Director James Comey intimated that there was some nefarious connection between President Trump and Russia. A few days ago (September 29, 2020), Hillary Clinton asserted that Trump knows that he was elected with the help of Russians. Furthermore, in the minds of many (probably millions) Americans, Trump and Putin are in bed together.

Besides the fact that when the Special Counsel Investigation headed by Mueller began, there was no evidence indicating any crime or any conspiracy/collusion between Trump and the Russians, an understanding of Russia’s geo-political goals relative to Donald Trump’s actions and stated goals should have ruled out the possibility of the Russians’ pushing for Trump to be elected President of the United States. Donald Trump’s election in no way served the self-interest of the Russians. In fact, a case could be made for the contention that Trump’s being elected President of the United States was Russia’s worst nightmare.

Reasons Why Russian Collusion/Conspiracy with Trump Is Unlikely

Lessons That Should Have Been Learned

It is fashionable to say that Donald Trump is a divisive figure. Yet what could have been more divisive than when right after the election and before inauguration, massive demonstrations against President-Elect Trump began with people screaming and shouting, “He’s not my President.”? Immediately, these demonstrators alienated almost half the country and the 63 million people who voted for Trump. The only way this divisiveness can be attributed to Trump is to say he caused it by getting himself elected President of the United States. The Resistance shifted into full-gear. To this very day, people are saying that Trump is not a legitimate President. The main proof of his illegitimacy was the allegation that Trump won the election through colluding with Russia. That was the clarion cry for three years.

The three years of promoting what Greg Jarrett has called the “Russian Hoax” and the subsequent impeachment have exacted a heavy toll on the nation. It clearly contributed to divisiveness. In many ways, it crippled efficient and stable governance. Though the economy did well before the COVID-19 epidemic, it could have done better. The one area of the economy that that did not take off as it should have is real investment. I am not talking about the buying and selling of stocks and bonds but things like construction of new factories, expanding business operations, and implementing new innovations. Such real investments look for political stability. The decrease in taxes and regulations was good for real investment but it was dampened by the uncertainty about how long these policies would stand, given the threat and actual impeachment of the President. The Republican majority in the Senate was not large enough to ensure that the Democrats could not have peeled off enough Republicans to remove the President from office. Though the majority of incumbent presidents have been reelected, the continual onslaughts against this President put that in doubt. When there is robust investment, the largest gains accrue to workers. Greater real investment increases worker productivity and increases in wages follow. It’s like clockwork. Given this atmosphere of uncertainty, the President’s hand in negotiating trade deals has been weakened. China may reason that maybe they should wait and see if a president who does not strike as hard a bargain as Trump is elected.

Our relationship with Russia has been damaged by this multiple-year investigation into alleged collaboration between Trump and Russia. Acknowledging that Russia is a geopolitical threat to the U. S. (an assessment by Presidential Candidate Romney during a 2012 presidential debate and ridiculed by President Obama and other Democrats) does not mean that we cannot, or should not, have a somewhat amicable relationship with Russia. Indeed we have had that type of relationship in a number of ways since the fall of the Soviet Union. U. S. and Russian scientists have collaborated as evidenced by Russian scientists even spending time at our national research laboratories. After President Obama discontinued the U. S. space shuttle flights, the U. S. had to hitch rides with Russia to the Space Station. We now have our own transportation there. And lastly, and very importantly, Russia is a major nuclear and military power that we need to have continual dialogue with. Such dialogue does not mean that we are in agreement on all, or most, things, but such relationships are necessary in an interconnected world. We had that with Russia even during the Soviet era when the relationship was much more adversarial.

Please note that nothing said above denies that Russians interfered in America’s electoral process in 2016; they had done it before 2016 and will do it again. What is denied is that Trump or his campaign conspired or colluded, explicitly or implicitly, with the Russians in an attempt to influence the 2016 election.

Accept the truth and the truth will make you free.

As set forth in detail in this report, the Special Counsel’s investigation established that Russia interfered in the 2016 presidential election principally through two operations. First, a Russian entity carried out a social media campaign that favored presidential candidate Donald J. Trump and disparaged presidential candidate Hillary Clinton. Second, a Russian intelligence service conducted computer-intrusion operations against entities, employees, and volunteers working on the Clinton Campaign and then released stolen documents. The investigation also identified numerous links between the Russian government and the Trump Campaign. Although the investigation established that the Russian government perceived it would benefit from a Trump presidency and worked to secure that outcome, and that the Campaign expected it would benefit electorally from information stolen and released through Russian efforts, the investigation did not establish that members of the Trump Campaign conspired or coordinated with the Russian government in its election interference activities.

Today's Word of Wisdom/KnowledgeMay 10th, 2020
Moderation (temperance) is a fruit of the Spirit.